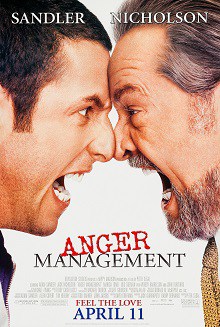 The world of mental health has been a topic of Hollywood entertainment off and on for many years.

There have been numerous movies and stories that have combined different mental health diagnoses with drama, comedy, and/or action.  Some of the depictions of the mental health world are more accurate than others. In most movies there is some glimmer of truth and reality but it is often overshadowed with Hollywood’s entertainment aspect. The movie Anger Management starring Adam Sandler and Jack Nicholson is no exception. While the movie is entertaining and surrounding a love story, there are some aspects of proper anger management techniques and practices that can be taken from the movie.

THEMES OF THE MOVIE

The are two main themes of the movie, and the one that seems to be the most accurate, is that anger can exist in everyone even if someone is calm and docile. Someone with anger management issues is not always easy to see. Some individuals who struggle the most are the passive aggressive individuals. Individuals who are more passive tend to keep anger bottled inside and never have a true healthy outlet. These individuals will allow others to manipulate and take advantage of them. This ability to bottle the anger up allows multiple situations to pile on top of one another until they reach a “breaking point”. The second point that the movie highlights is the difference between assertiveness and aggressiveness. Many individuals struggle with understanding the difference between the two terms. Assertiveness is persistence and drive to be focused on a goal. Aggressiveness is more about manipulating others for personal gain.

There are many parts of the movie that have effective anger management techniques that are subliminal within the comedy of the movie. Listed below is short list of real world practices that are properly displayed in this Hollywood adaptation:

True emotions below the anger.

Deep breathing as a significant tool in anger management.

Real group work versus the movie.

To conclude, the movie is funny and meant to be entertaining. Although if one were to read between the lines it is clear that the movie also presents a few significant and valuable lessons in anger management. This is not to say that the movie could serve as a replacement for professional anger management assistance. I leave you with my favorite quote from the movie, “Let them be, set your anger free”.

Wade is one of our therapists here at Elliott Counseling Group and specializes in anger management as well as teenage adjustments and executive fuctioning issues.

LOOKING FOR A THERAPIST OR COUNSELOR that specializes in anger management?