Let’s first dig deeper into the definition of sexuality. Sexuality is an essential aspect of who you are and is incredibly diverse. In essence, it is your sexual feelings, thoughts, and behaviors toward others. Your sexuality also encompasses whether you find someone physically, mentally, emotionally, or sexually attractive.

For some, discovering sexuality can be an exciting experience. For others, it can bring up intense feelings of guilt and shame. In turn, it can lead to self-destructive behaviors, self-sabotage, and even self-rejection. The best way to begin to heal and live authentically is to break the cycle of guilt and shame around your sexuality.

I want to share a glimpse of my personal journey about my sexuality and how guilt and shame played a role.

I was twelve years old and was home sick from school for a couple of days. During that time, I experienced my first real crush. Yet, the gut-wrenching feeling of guilt, shame, and even regret was paralyzing. It felt wrong to feel the way I did. It felt like I was “supposed” to regret having the feelings. I was ashamed of my sexuality.

For years, shame over my sexuality haunted me, and I knew I needed to break the cycle.

My internal dialogue was filled with self-rejection, self-sabotage, and a complete loss of self. The story that played on repeat in my mind was, “This year, I will stop having these thoughts. I will be normal, enough, and… straight.” I lost a huge piece of myself when that entered my mind. Panic attacks surfaced because of fear. The fear of being seen for who I am and being judged for it. And the fear that people will know my secret because I was convinced, they can tell. As a result, I felt incredibly empty, alone, and isolated.

It was as if I was in a constant battle of questioning, “What’s my sexuality?”

You see, I am from a small town with a liberal family. Therefore, I never heard that being gay was wrong. However, I experienced several microaggressions. For example, the message was that if you are gay, you are weak, looked down upon, and laughed at. All of which I feared becoming. All of which I feared I already embodied.

My life looked good on the surface. But I felt like a fraud. I felt lost, scared, and consumed with anxiety. Hiding your true self results in not feeling good enough. And that “not-enoughness” breaks you down to where you feel nothing but emptiness inside.

You completely lose all self-esteem due to the shame of wanting to be someone else. It causes you to push away parts of yourself to the point where anxiety and depression are inescapable.

Because of the guilt, shame, anxiety, and depression became one amongst the men with low self-esteem, a place I didn’t want to be.

It was time to break the cycle and embrace my authentic self and sexuality. Through awareness and realization, I began my personal journey to healing through practicing radical self-love, self-compassion, and improving my self-esteem. I was on a mission to embrace radical acceptance of my entire being, including my sexuality. I changed my internal dialogue from “I am not enough” to “I am loved for who I am.” A daily practice that I did to support this was self-love affirmations. I retrained my brain to accept my thoughts without judgment and embrace my belonging.

Also, to support me, my family and friends worked diligently to educate themselves about what it means to identify as LGBTQ+ and become an ally. They stand for equality for me, no matter my sexuality. At the end of the day, no personal journey is easy or perfect. And your journey looks different from mine. Nevertheless, everyone deserves to feel supported to overcome shame and guilt due to their sexuality.

What’s The Difference between Guilt vs. Shame?

Guilt is the emotional state present when we feel we have failed. It also brings up additional emotions like sadness, anxiety, or anger. For example, I hid my sexuality and sexual identity; therefore, I feel guilty.

On the other hand, shame is an intense emotion about the self from not living up to the standards set. For example, I am not enough because of my sexuality.

The difference between guilt and shame is that shame makes you see yourself as wrong, while guilt is when you did something wrong. Shame is toxic and results in extremely low self-esteem. The problem is the individual rather than the action or behavior. On the other hand, guilt can be healthy as it is a moral compass guide to course-correct problematic behaviors or actions.

How to get rid of feelings of guilt and shame to break the cycle.

Everyone deals with guilt and shame at various parts of their lives. However, they can affect one’s self-esteem and mental health when they are felt too strongly. While no emotion is destructive, specific societal pressures cause individuals to think that their actions are inadequate due to belief systems.

People who identify as part of the LGBTQ+ population are familiar with the feelings of guilt and shame. While this has been improving over the years, it still plays a significant role in LGBTQ+ individuals’ personal journeys because it has been considered out of the norm, different, and unacceptable.

Here are five ways to break the cycle when dealing with shame about your sexuality.

Create a loving environment where everyone feels loved – no matter who they are or who they love.

It does not mean that we will go to extremes to challenge things that are harmful to others. However, being a part of the LGBTQ+ community causes no detrimental effects to others. Raise children that know that no matter who they love and no matter how they identify that they are perfect just the way you are. Use encouraging words and reminders that being true to themselves does not equate to being “wrong.”

Be honest about your struggles.

Even in an inclusive environment with a foundation of love, you will undoubtedly go through struggles. Be honest about the struggles you face. Support the younger generation who are struggling with their sexuality. Please share your experiences and how you overcame them and broke the cycle of shame and guilt. Let them know that it may not be the easiest path to live, but the way to happiness is central to being who you are. Remind them that being true to your authentic self is what matters (no matter what others say or do).

Share who you are and what makes you different.

There are conflicting messages in our society. The conflict is present in these two messages: be uniformly the same and be uniquely different. However, when you shine with uniqueness, there is the negative stigma attached to being different. The only way to break stigmas is to be loud and proud. Break the cycle and be proud of what makes you different. Embrace your strengths, your humor, and your sexuality. Honor your history and your individuality.

Stand up for others.

Be mindful of your words.

In conclusion, here is a list of coping skills to overcome shame and guilt that you can begin immediately. Breaking the cycle starts with you.

Remind yourself that it is ok to break the cycle of guilt and shame for being who you are. Write a list up of everything you love about yourself. Start each day with a positive affirmation such as “I am a strong person” or “I am amazing,” and end each night with a list of things you did well. I tend to use affirmations such as “I am a proud individual” and “I am fierce.”

Whether attending a Pride celebration, giving yourself something extra special for a tough day, or making a big deal out of small successes, celebrate every day. Self-esteem comes best from within, and shows yourself how much you love you will exponentially increase it! My favorite way to celebrate myself is to be as “loud” about who I am as possible.

Whether you are reaching out to the community to learn a more appropriate language, finding a therapist to help guide you back to higher levels of self-esteem, or joining a support group to feel less alone, seek assistance. The world is full of burdens that will make shame and guilt much more challenging to deal with, and remember you never have to deal with it alone. 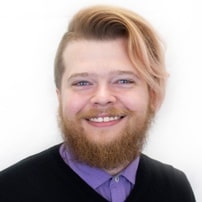 Tyler Koontz is a Licensed Social Worker and works with adolescents, adults, men, and women, from the ages 11 and up. He specializes in all forms of chemical addiction and mental health disorders, from mood disorders to anxiety, personality disorders, and beyond.

ARE YOU LOOKING FOR LGBTQ+ COUNSELING, SEXUAL IDENTITY COUNSELING, OR SUPPORT TO BREAK THE CYCLE AROUND ANY FEELINGS OF SHAME OR GUILT WITH SEXUALITY?

We are here to help. Our mental health clinic in central Illinois offers medication management, therapy, and counseling services in Champaign, Urbana, and Mattoon. Additionally, we offer Teletherapy and Telehealth for Illinois residents. Contact our client care team to start your mental health and wellness journey.